In these days of “modern romance,” of swiping and promiscuous dating and breakups, the general idea of courtship has fallen out of vogue. We acknowledge that old-fashioned courtship is an outmoded convention belonging to a different age. Modern courtship is gaining ground!

Courtly love and chivalry were the prominent themes that French medieval troubadours sung about in Provençal in the 11th to 13th centuries. 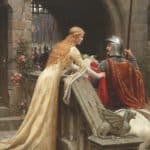 The chivalric social code of the medieval Christian institution of knighthood governed a knight’s and gentlemen’s behavior. A combination of qualities were expected of an ideal knight, especially courage, honor, courtesy, justice, and a readiness to help the weak.

“Ladies first,” a chivalric code encouraging polite gentlemanliness as in allowing the ladies to go before the men, still remains as custom in Western modernity.

In the developed West, more people have moved on from looking for a companionate marriage to a soulmate marriage. And yes, relationship mores still differ considerable across cultures.

In our envisage, “modern courtship” simply allows for the two singles to encounter and thus get to know each other without early physical intimacy and runaway emotions clouding their view, and without pressure exerted by motivated or even despotic members of family.

We believe that when a dating couple comes to recognize, during courtship, that there is passionate attraction between them and behavioral maturity in each, they may actually have a good chance at real love.

Courtship is understood as the dating period in a pair’s budding relationship which precedes their engagement and, traditionally, marriage.

The goal of spending time in modern courtship is to find out if both actually resonate with each other, perhaps in terms inclusive of character and personality , and/or expectations and goals for the future.

In addition, libido and related issues will need to be discussed as well. Avoiding this rather tricky topic is not helpful as it otherwise comes to eventually nip us in the behind!

We say “resonate” on purpose, not wanting to conjure up the ill-fated concept of compatibility. As you know, even opposites can attract.

“Does our love have a future?” While all people think about that, couples may find it tricky to talk about. We know what marriage is. But what is love, what is eternity? Do I want a marriage without much love? Is a marriage based on friendship good enough? What is more important: passions or principles?

Modern courtship is the proper time during which singles may gradually disclose their weaknesses, shortcomings, hangups, blind spots, and whatever else is known by them to each other. That includes a necessary talk about human sexuality. “Do you have any issues with sexuality?” This is a complex, if not difficult, topic to raise. Since modern courtship tries to avoid some of the pitfalls of modern romance by advising singles to hold off on sex – perhaps until after engagement – it affords singles a rather graceful entry into the intimate relationship.

On the other hand, modern courtship is still the right time to be as enchanting as you can be and then some. But surrender to the other’s enchantment, if possible, only after engagement. There is no pressing need to compromise the pretense of dignity early on. Mind you, if you cannot or will not be enchanting, the other has not much to surrender to. All that goes for both, the man and the woman.

Well, modern courtship might make a comeback as soon as the hollow promises of modern romance and promiscuity have run their course. Technology has not resolved, but only put new angles on the challenges that have always existed in love, such as cheating, spying, and breakups. We love to work with discerning singles who believe in the meaning of true love and will give modern courtship a chance.

Having read this post, please now ask yourself these questions:

We write about the love that makes the world go 'round; and soon may offer mentoring, coaching, as well as introduction services to Singles seeking a lasting, loving relationship.