Romantic love is understood by many as the proverbial search for the One, the perfect soul mate, or — as the nineteenth-century ideal would describe — as the immortal beloved.

The quest involves the idea of creating a union and becoming ‘We’One's hidden agendaFor WE to be possible, each single's hidden agenda has to be largely ditched, or merged with the other's as well. Not easy... instead of remaining two conjoined ‘I’s.

The two romantic lovers are not all together yet, their union is still awaiting endorsement by each other — thus their love is called romantic and not yet real or even true.

Is there really a One meant for you? Yes, there is. But please understand that you decide who that shall be. There is no one in this world predestined to be the One meant for you, not divinely willed by God and better not by parents.

So why do we give you, the reader, the impression that there is One meant for you to begin with? Simply because most people like to think that there is a One meant for them. Reading about that probably makes you feel good, and keeps you interested in perusing this article — at least so far.

Sorry to pop the bubble. We’ll be sincere thereafter now. It is our one instance of clickbait. But clickbait is what you have to become immune to, especially in dating. We like to condition you to not constantly fall for appearances.

Deciding on choices is a tricky endeavor — for whatever one decides, one cannot easily blame others if the choice does not work out. Some singles might experience that the task of making consequential choices is rather burdensome instead of thrilling. “Serve me up the One-Good-Enough,” they rather say.

Timid people they are, with little courage at all! Well, maybe not. Lived situations are usually too complex to be reduced to a single line. The exclamation may very well be just one of my own Freudian slips as I do regret having been too timid too many times in my past.

Being a ‘One suitable for the other’ might just work out for many, however, some ‘classy’ folks prefer to not settle too quickly. How about you?

In these movies, romantic love is eternalized, either by the death of a lover, or by the lover’s story simply not told to the very end. That is, the story is not told past the initial romantic episode and thus leaving things to the wishful imagination of the captivated moviegoer.

Naturally, we all like to be inspired rather than presented with unsavory details about relationships and so our wishful thinking takes over. But when it comes to the One, you better be deliberate rather than just intuitive — it is a choice that must be yours by involving your heart, intellect and will.

You know, it’s quite a job starting to love somebody. You have to have energy, generosity, blindness. There is even a moment, in the very beginning, when you have to jump across a precipice: if you think about it you don’t do it.Jean-Paul Sartre - Nausea

Not that I am a great fan of Sartre, his lifestyle, and his writings, but one has to give credit where credit is due. The man could think. Which is to say that when the One is near, you ‘gotta have to have courage.’ Yes, courage. That much-promoted virtue, that most famous virtue, the virtue without which life would probably come to an end.

One may think that it is pointless to say that courage matters in the affairs of love, but that is where it really counts. Second chances are rare, so go for it and give love a chance.

One has to understand that love invents a different way of lasting in life.Alain Badiou - In Praise of Love

Without the One meant for you, without love, what will your life be like?

No Time To Read Much? 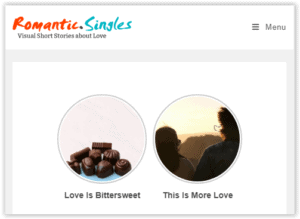 On your phone, tap through visual short stories at romantic.singles instead.

This website uses cookies to improve your experience while you navigate through the website. Out of these cookies, the cookies that are categorized as necessary are stored on your browser as they are essential for the working of basic functionalities of the website. We also use third-party cookies that help us analyze and understand how you use this website. These cookies will be stored in your browser only with your consent. You also have the option to opt-out of these cookies. But opting out of some of these cookies may have an effect on your browsing experience.
Necessary Always Enabled
Necessary cookies are absolutely essential for the website to function properly. This category only includes cookies that ensures basic functionalities and security features of the website. These cookies do not store any personal information.
Non-necessary
Any cookies that may not be particularly necessary for the website to function and is used specifically to collect user personal data via analytics, ads, other embedded contents are termed as non-necessary cookies. It is mandatory to procure user consent prior to running these cookies on your website.
SAVE & ACCEPT